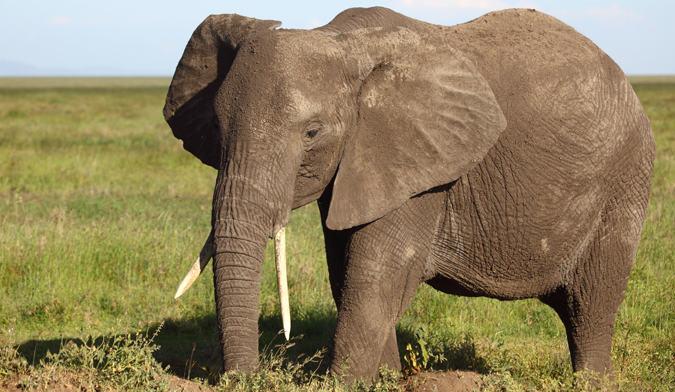 Day 1 Arusha - Tarangire Park - 125 km / 2h approximately
After breakfast, depart to the Tarangire Park on a scenic road. On arriving at the gate take a game drive to your lodge in time for lunch, followed by an afternoon game drive. Dinner and overnight at Tarangire Sopa Lodge (or similar).

Day 4 Ngorongoro Crater - Arusha - 215 km / about 3h
After breakfast, depart for Arusha where you will arrive in the late morning.

Prices are per person for the entire route

Tarangire Sopa
Tarangire Sopa Lodge hidden among the kopjes and surrounded by ancient baobab trees, is centrally located in the park with the largest concentration of elephants per square kilometre in Africa. The lodge is located 118 km southwest of Arusha, about 2 hours drive or a 20-minute flight followed by game drive transfer of 20 minutes. The lobby, spacious and bright with marble floors, has sliding glass doors that open onto a veranda where you can relax and enjoy the view. The lodge has 75 rooms, all with private sitting room, bathroom, 2 king size beds and a balcony, where you can enjoy the scenery; 4 of these rooms are suitable for the disabled.

Ngorongoro Sopa Lodge
The lodge is located at 170 km from Arusha, perched on the edge of the Ngorongoro crater, a world heritage site, often referred to as the eighth wonder of the world. The lodge has a beautiful view of the crater, which is home to large herds of buffalo, wildebeest, zebra, black rhino, elephants, cheetahs, leopards, lions and herds of gazelles and wildebeest. Its location on the eastern edge also allows easy access to the crater and a spectacular view of the African sunset. The lobby is very spacious with a high ceiling and a glass dome. Tea and coffee are freely available to guests in the bar area. The lower lobby has a large window, which opens onto the veranda, overlooking the pool. All 91 double rooms are very spacious with two queen beds and a separate dressing area. The restaurant is in a circular shape, and a feeling of space with the ceiling looking like the inside of an umbrella. Ngorongoro Sopa is the ideal setting for small wedding ceremonies.

Tarangire National Park
It is the vast number of baobab trees that first captures the eye as you enter Tarangire National Park. The gently rolling countryside is dotted with these majestic trees, which seem to dwarf the animals feeding beneath them. Although elephant will be the primary focus of our time in Tarangire, it has plenty of other animals for us to see. It is spectacular at the height of its season, during the dry months of July to December, when the animals migrate, many of them daily, to the permanent water of the Tarangire River. The species seen is very diverse from a large population of elephants to wildebeest, zebra, buffalo, impala, gazelle, and eland range along the dry river banks. With a smorgasbord of wildlife, predators are ever present. During these months, you would be witness to the second largest concentration of wildlife per square kilometre within Africa! It is second only to Ngorongoro Crater. The animals aren't the only factor that impresses so many of our guests but the large variety of habitats provides us with amazing birdlife of over 550 species. This is a long park and as one ventures further south it becomes increasingly wild, exciting and unpredictable. By mid March the place is brittle and dry as towering purple-grey clouds gather over the horizon heralding Biblical thunder storms of lighting and rain sweeping across the plains, creating raging torrents from the dusty luggas. Overnight some of the animals start migrating back to the vast Maasai Steppes that surround this park to pastures new until, in the month of June onwards, the sun dries the bush once more to start wildlife’s long trek back to Tarangire River. The circle of life begins. Tarangire Park is wild and varied. To us it is a wonderful park, truly “Africa Uncompromised”.

Conservation Area of Ngorongoro
After winding up through the rain forest on a snaking road and cresting the Crater Rim, the view is breathtaking. Beneath you the entire crater can be seen 600 metres below. This crater should correctly be called a caldera, when a volcano grows to a great height before collapsing, leaving a crater. This small world of animals has rightly earned a reputation as one of nature’s wonders. It holds as many as 50,000 animals living in a balanced ecosystem of 250 square kilometres. You will see almost every animal from enormous elephants, rhinos, hippos, many species of antelope, lions, leopards, cheetah and much more. There is a large variety of vegetation to enjoy from the verdant rain forests clothing the surrounding rim to the swamps, soda and clear water lakes, expansive plains and soda pans on the crater floor. With a picnic, you can spend the entire day or afternoon in this wonderland holding more ungulates and carnivores per square kilometre than anywhere else in the world. The area (8,228 sq. Km) extends out from the crater and includes vast plains and the famous Olduvai Gorge, where the Leakey family discovered some of the oldest fossil bones of our ancestors. In this vast area there are other craters, such as Olmoti, Lake Empakaai Crater, Mount Oldonyo Lengai and the Gol Mountains, offering those who want to venture into this wilderness for an exciting "off road" experience. A choice to suit all tastes.